We are all the flowers of one garden

Prince Charles, the heir to the British throne, spoke on radio before Christmas about religious persecution. In many countries, religious minorities face multiple challenges, and the situation reminded him, he said, of the “dark days of the 1930s”. In his opinion, it is "beyond all belief" that it still continues even after the horrors of the Holocaust were exposed.

For members of the Bahá’í Faith, religious persecution has been an issue from its beginning. The Bahá’ís in a number of countries are still facing persecution, with several examples recently appearing in the news media. However, Bahá’u’lláh taught that, “It is better for you to be killed than to kill,” and Bahá’ís never resist violence with violence.

Currently, persecution of various religious minorities takes place in India, Pakistan, Burma and other countries, as well as in the Middle East. The people who kill someone of a different religion deny, by their actions, the very nature and purpose of religion. In the Bahá’í Writings it says: “The advent of the prophets and the revelation of the Holy Books is intended to create love between souls and friendship between the inhabitants of the earth.” Unfortunately, many people no longer read these books…

In this country there have recently been many individual acts of hatred or abuse, such as burning down mosques, rudeness to women wearing hijab and verbal attacks on Jews. However, this sort of behaviour is not only aimed at religious minorities, because there is now rudeness to, and even attacks on, people from other European countries. All of these examples show that the persecution actually stems from a sense of “otherness”: “You are not one of us!” It is also a manifestation of self-centredness and a lack of empathy, as is the persecution of people who have limited mental capacity, or are sleeping on the streets, or who simply look different. It is the same phenomenon as some forms of bullying: “You are inferior (or just different) to me, therefore I will trample on your rights and your feelings.”

A completely different perspective is called for, to eliminate this kind of behaviour. Bahá’u’lláh said, “O people of the world, ye are all the fruit of one tree and the leaves of one branch.” His Son, ‘Abdu’l-Bahá, used the analogy of the flowers of one garden: “though differing in kind, colour, form and shape, yet … this diversity increases their charm, and adds to their beauty.” This is a poetic way of expressing the scientific fact that, despite certain superficial differences, all human beings are inter-related – one human family. On another occasion he used a musical analogy: “The diversity in the human family should be the cause of love and harmony, as it is in music where many different notes blend together in the making of a perfect chord.”

Prince Charles suggested that regardless of one's religion, people should seek to value and respect other people, “accepting their right to live out their peaceful response to the love of God.” This fits perfectly with Bahá’u’lláh’s call to: “Consort with the followers of all religions in a spirit of friendliness and fellowship.” One of the reasons why religion is so necessary is that religion, in its pure form, gives people a positive code of behaviour – lifting people to a more ethical way of life. Far from persecuting others, we should treat them as God would wish us to treat them, and as we would wish to be treated ourselves. We should respect them, love them and help them. Bahá’u’lláh said: “O friend! In the garden of thy heart plant naught but the rose of love...” 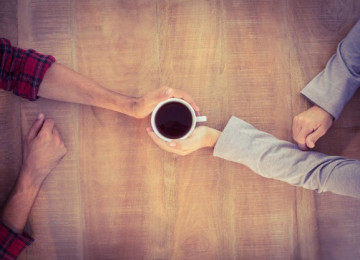 The Joy of Coffee with True Friends